You Are Here: The role of structural equilibrium fluctuation in proteins

The role of structural equilibrium fluctuation in proteins 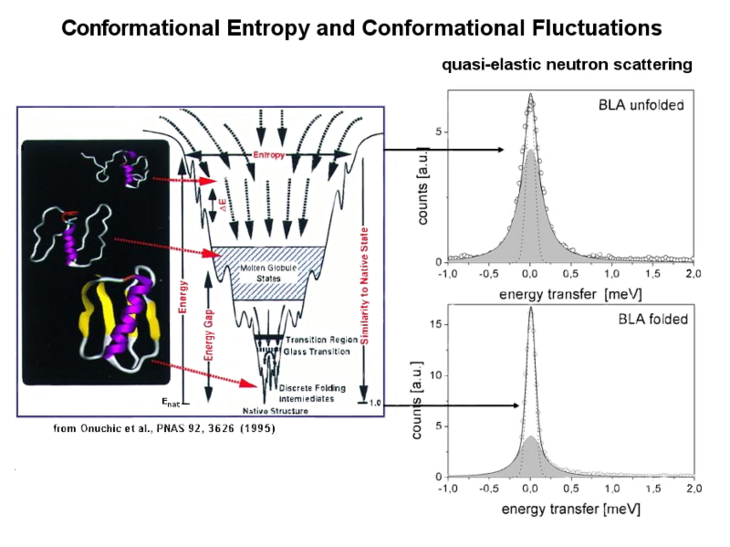 Biological macromolecules, such as enzymes or transport proteins share a structural complexity which is also reflected in a complex dynamical behavior. In particular fast stochastic fluctuations on a picosecond time-scale are relevant to overcome energy barriers which are given by the energy landscape of the biomolecules. These fluctuations can determine the kinetics of transitions between conformational (intermediate) states. In addition, these fluctuations contribute significantly to the conformational entropy of a biopolymer, and are therefore important for protein stability, protein folding and protein-ligand interactions. One of the most powerful techniques to study in particular fast fluctuations is given by neutron spectroscopy which in principle provides a detailed picture about motion in the time regime of 10-14 – 10-8 seconds with amplitudes in the order of 0.1 – 10 nanometer. So far we compare for various water soluble proteins (a-amylases, PGK, myoglobin) dynamical properties between the folded and various unfolded states (heat, GndHCl, or pH denatured states). One particular goal of our studies is to estimate the contribution of measured picosecond fluctuations to the conformational entropy change which is related unfolding/refolding transitions or to protein/ligand binding. In further studies neutron spin echo technique is employed to investigate domain movements (e.g., hinge bending) which are directly related to the catalytic actvitity of enzymes.