You Are Here: Atomic scale Investigation of internal interfaces in Cu(In,Ga)Se2 solar cell 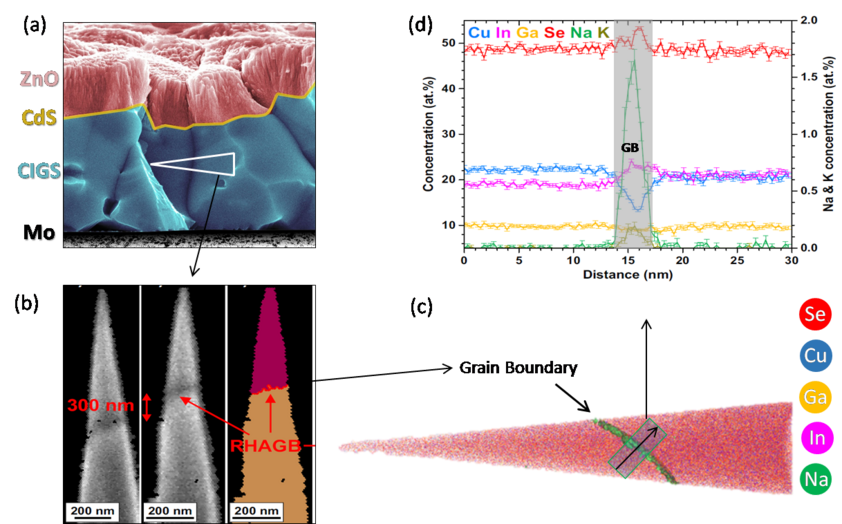 Copyright: © I. Physikalisches Institut A Figure 1: (a) SEM image of CIGS solar cell stack. (b) SEM image of tip constructed in the ROI. (c) 3D reconstructed atomic volume of the needle-shape sample showing distribution of all elements present. (d) Concentration profile across the GB.

Atom Probe Tomography (APT) is a high resolution microscopy technique able to resolve materials at sub-nanometer scale. The example here is shown for CIGS (Cu(In,Ga)Se2) solar cell which is more efficient in its polycrystalline form compared to monocrystalline counterpart. The beneficial/detrimental properties of grain boundaries (GBs) in CIGS had puzzeled the researchers over the last decade [1,2]. A GB is an interface between two grains stretching about one or more atomic planes, hence width of a GB is of few angstroms. Thanks to APT, which enables detection of atomic distribution in 3D, very local information about the elemental fluctuations is possible. This outstanding potential of APT is combined, for example, with the electron backscatter diffraction (EBSD) technique directly on the same needle-shaped sample to obtain the interdependence between the structure of the GB (i.e. misorientation angle and GB plane normal) and segregation behavior of the impurities [3]. Figure 1(b) shows an EBSD map of an APT needle which clearly shows the location and structure of the investigated GB. APT 3D map (Figure 1c) shows the 3D representation of the atomic distribution in the vicinity of a GB in CIGS. It is clearly observed that GBs in CIGS are decorated by Na atoms. Na atoms were not intentionally added to the thin films but were segregated due to out-diffusion from the soda lime glass substrate. Presence of Na at the GBs was also linked with the improved efficiency of the cell playing a passivating role [4]. Moreover, concentration profile in Figure 1d could be extracted across GB with sub nanometer precision.

Copyright: © I. Physikalisches Institut A Figure 2: (a) Tandem structure of a CIGS solar cell and (b) sputter tool used for the deposition of buffer layer, window layer and front contacts

Another important internal interface which plays a crucial role for the device efficiency is the p-n Junction.
Buffer layers are usually II-V or II-VI type semiconductors, typically 50-100 nm thick and form together with the CIGS layer the p-n junction in solar cells. Buffer layers are very crucial in CIGS solar cells since they assist in forming favorable band alignment and good lattice mismatch to minimize recombination and thus boost the overall efficiency [5]. The most commonly used buffer layer in CIGS solar cells is CdS that is mainly deposited chemically. However, this deposition procedure produces a large amount of toxic CdS waste. Along with the necessity to eliminate the wet solution based process, industry and the photovoltaic community is looking for alternative materials to CdS buffer. Indium sulphide (In2S3) is one of the best alternative buffer layer having similar opto-electronic and structural properties to CdS. Also, wet CBD is replaced by sputter deposition of buffer layers which is advantageous since it allows large scale industrial integration to the dry-vacuum based in-line process [6].
Figure 2: (a) Tandem structure of a CIGS solar cell and (b) sputter tool used for the deposition of buffer layer, window layer and front contacts
Our work focuses on the optimization of sputtered alternative buffer layer materials like In2S3 and Zn(S,O) using state of the art fully automated sputter tool custom built by Aurion GmbH. Average efficiencies in excess of 11% for a mini-module and 13.6% for individual cell has been obtained for sputtered In2S3 buffer layers. However, there is still a large margin of improvement in efficiency by further optimization of buffer, i-ZnO and Al-doped ZnO layers. Electrical measurements like light/dark IV and EQE measurements are performed. Compositional characterizations are done mainly using EDX and APT on completed CIGS solar cells. APT allows us to accurately estimate the elemental distribution across the p-n junction [7] which is not possible by any other characterization technique. Needle-shaped samples are prepared from the CIGS solar cells that contain the p-n junction with In2S3 at the apex of the APT sample. The precise estimation of interfacial thickness, intermixing of elements and diffusion of different elements with respect to their deposition and post processing conditions can be accurately determined by APT. Figure 3 (a) shows the APT elemental distribution at the CIGS/In2S3 interface with ~90 nm thick In2S3 buffer layer taken from sample with efficiency over 11%. Figure 3(b) shows the proximity histogram using a 0.2 nm bin size was built for interface. The interface lies at the cross point between Se (red) and S (yellow) as they usually do not interdiffuse at low temperatures. The width of the interface is about 2 nm where the Ga concentration drops from 8 at.% on the CIGs side to 0 at.% on the In2S3 side. 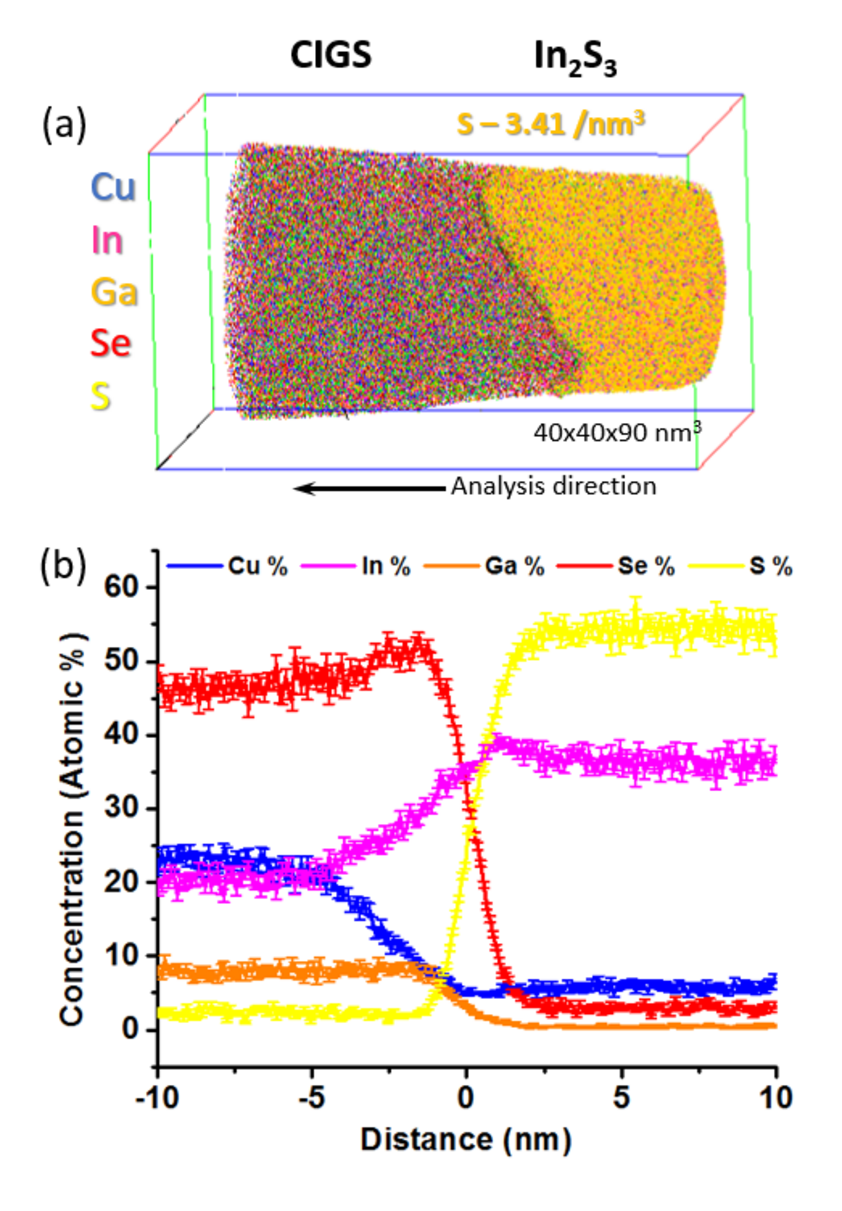